At first part of me was relieved that she was breaking up with me. Something was wrong – I felt too much pressure.

Then the pain kicked in, then anger, then the slow steady burn of heartbreak. I’ve been expecting it to steadily diminish. It did, at first.

Then I caught wind that she was thinking of me, and somehow I caught hope that we had a chance.

She used to visit near every day, and would be so excited to show up at the door.

Jeesus, the first thought in the morning when I wake up is her. And the last thought before going to sleep. And a constant feeling in my heart that keeps working it’s way into words in my head. It’s two months already, and she’s had her heart rest period and is going out on dates. I’m nowhere near anything like her; I don’t need to be not into anyone else to be heavily invested in her as my mate. And I don’t get over people fast. If at all. I don’t really even understand what ex girlfriend means, frankly – other than girls who won’t fuck me anymore or die. We were mates, something she can’t comprehend if I also have eyes and any time whatsoever for anyone else.

She aimed her ass at me, and asked me to make her pregnant.

I wouldn’t mind the baby, and I’d be happy to have her as a mate for life, but she wants the baby under the condition of me not only appearing to be monogamous, but actually always being monogamous. I think that’s an absurd overly stringent condition. I can’t do it. I know I can’t. I don’t have that to offer, and I can’t offer something pretend – she’d find out or see through it and it wouldn’t work.

I kept my dignity during the breakup, but it was very uncomfortable, and I kept waiting for her emotions to die down so we could properly connect again, and maybe work out how to be in each others lives while she went ahead and sought what she wanted in her life. They never did, and we never did.

Very sensitive girl, with at least as much relationship OCD as I have.

I can’t change her. I can’t make her accepting of all of me.

And I can’t seem to get over her.

In my mind and heart she’s still my mate. Like already my wife, but not here currently.

She doesn’t see it that way. She ghosted me, because she thinks it’s the only way to be able to focus on someone new who can give her the life she is looking for. And because after she broke up the very same night I was in the bed of another girl, and she assumed it was an ongoing thing prior to the breakup.

I once had a girlfriend I was very dissatisfied with, as she was older than me, and so physically not my type. That was one of the biggest heartbreaks of my life; I missed her for two full years, and during those two years I was having extremely frequent fantastic sex.

Most guys who write on manosphere type blogs are not talking about long term relationships, and almost never about ones where the partners bond. We basically lived together, I took her viginity, we had three years, and were very comfortable and happy together. She was home.

There is no home now.

Nobody else makes me at home.

Other girls were just other girls. Not home.

This might take a while. God I hope not another two years.

Update: I’ve been taking baclofen to treat acid reflux for 5 days now, and it’s been helping, but unfortunately I’m going to have to stop as it makes me moody and sad. A known side effect. I think it would be unhelpful to my mood regardless of circumstances. It’s a muscle relaxant, and makes my mood lax too.

Update: A lot of what I offer is what I am; a person who loves to connect. I can’t be that guy with that to offer unless I grieve – it’s the only reset that can get me back to the place where I’m emotionally open and sensitive and have what I have to offer.

Otherwise I’ll be emotionally shallow. And that’s not my thing; not my hook; not my game. Not me, not my life.

There are positives and negatives to being emotional, but it’s definitely a baby, not bathwater. A major reason I was into V was how attached and emotional she was. It was also a major reason I resented her and wanted to pull away.

The baby can be fine tuned, but keep the baby.

In this vein I find that the diorama that has been created that is called red pill thought is now quite often more harmful than helpful. People craft a mental map, and compare their experiences and the experiences of others against the map, and if there are differences, proclaim that the experiences are wrong.

Instead of updating their map.

So they create a world, instead of describe one, and wind up actually inhabiting a diorama, instead of sharing real life in a real, complex, ever changing world.

Being quick to label everything as either alpha or beta, R or K, is using mental labels in such a way as to be more wrong than right. The world really isn’t like that. It’s very kindergarten level understanding. Very cartoonish.

Love isn’t a weakness, and neither is grief, nor is pair bonding beta, nor is it alpha to be an unmoving unemotional rock.

The artist is neither alpha, beta, or sigma. He is bravely present and creative, and out of that comes his undying panache. No excuses, no apologies.

I don’t believe in forever, but occasionally I take some nostalgic pleasure in the best times shared with all my girls:

and a few of the songs that V kept humming the weeks leading up to the breakup:

And one she had running through her head about a month later, that led to me regaining hope, and thereby increasing my heartbreak:

Three weeks later she now declares she’s in a new relationship, as I learned last night. I thought the lack of hope would help me move on, but if so, moving on is full body moody.

And we’ll end in a more upbeat, but still dusky tone:

Update: Yesterday’s theme was connecting with my emotions, listening to music, playing piano. A long walk on the beach, and the usual few hours spent hunting for new dates I’d be really into. This morning I woke up out of a dream in which I was talking to V about being together. On waking out of that reality hit me like a flood of rotting sardines. I hate waking up to that feeling of things being horribly wrong and depressing and anxiety causing. That’s unhealthy. Today I’m playing a tighter game with my mind; lots of body centered meditation, focusing not on any thoughts, but relaxing the places in chakras where there are emotional knots. Much less narrative today.

There is a meditative technique called tight and loose. That’s where you alternate between extremes of a very lax almost no controlling awareness discipline, to tightly labeling thoughts and constantly going back to following the breath, viewing thoughts as interuptions. So yesterday was loose day, and today is tight day.

And I’ve made some progress in lining up dates with girls who could really work for me, on the physical level at least.

This process is a bit of a surprise, as it was nearly entirely initiated by my own ambivalence. I could very easily have kept V. She gave me ample opportunity, after opportunity to claim her in a way that worked for her; monogamous marriage, after an extended passionate courtship in which she gave her all and best possible self to me and for me. And put up with loads of heartache giving me new chances. And I had even been thinking of moving on myself. I’ve had worse grief in my life, but I didn’t expect this much with her for so long. Not sure what lesson to take from that, other than perhaps try my best to find a girl I’d be less ambivalent towards and more able to offer what she wants longer term.

I suppose the other lesson is how much the companionate portion of relationships is a hook for me. It’s her friendship that and our comraderie that was a huge part of our coupling. The sex and her body was a big part of it, but this relationship was rare in how much of the value was friendship based. That was really nice to have, and I’m glad I got to experience that, with her. I’m rather nostalgic for it, but unfortunately, the brain is wired to erase all good memories and highlight the negative ones after a breakup, so for her she seems to have done that.

I deliberately re-wired my system to not follow that easy way out natural instinct. It’s been scientfically carefully studied how the memories get re-edited; I read it in an old psychology today magazine back when I was going through a divorce, nearly 30 years ago.

Sometimes, when infatuated enough, I actually do want to marry a girl and knock her up. V was half my age, fit and tight and shapely, good sexual match, and so I think by most peoples standards I was getting a good bargain overall with her. But somehow she didn’t put me over the edge with uncontrollable lust to want to immediately lock her down with a baby to secure her. Instead she had to slowly work her charms on me, and year after year get under my skin. Which she did, admirably and to great success.

In order to get the bargain of what I have grown accustomed to feeling deserving of, an attractive girl in her early twenties, I might have to offer what could be quite a stretch for me. We’ll see.

For self esteem reasons I think most guys would prefer to view themselves as better than the exe’s new beau. He’ll be better than me in a lot of ways, sharing more of her culture, and not being so ill; my illness always kept me from going out on the adventures that she wanted. I’m pretty sure she will be screening for a guy dedicated to marriage and babies, upfront, and my guess is such a guy won’t be as agressive in bed as she very strongly prefers. Plus the average penis size of Koreans is not even 4 inches long. And mine is noticeably above average in length. All girls I’ve ever asked, when going from a great sex to a great security relatonship could not be induced to complain; they seem to somehow forget that they ever had those needs. Except for one girl who would tell me at every opportunity that she missed the size of my cock. She said her new guy was a way better lover for her, but it was my dick itself she missed. For V, my guess is, she’ll take a big hit in the area of life that’s been my biggest concern. Cruel and petty of me to wish her anything but utmost happiness, I know, but I suspect it’s a 99% common pettiness. 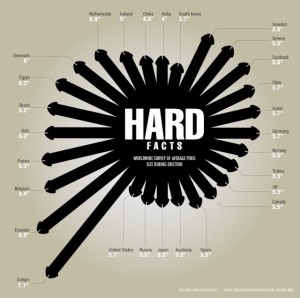 I’ve got an average sized penis. For a Congolese.

Famous true story joke “Why is a young hottie like you with that ugly old man?” “Because he’s rich and has a big dick.”

8 thoughts on “There is a reverse to getting over someone?!”