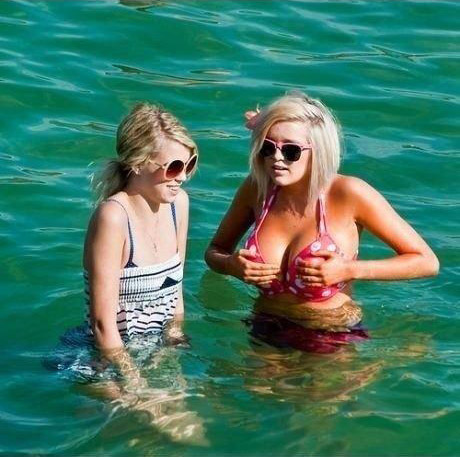 Naughty Nomad discovered that most Cuban girls are whores. I left these comments:

The fact that flat chested women can be sexy doesn’t mean that tits aren’t sexually attractive, or that some guys don’t screen for tits.

In SEA you can get girls without paying, however money sex and love are not considered distinct. Frankly I’ve gone local and now consider it an illusion to believe that youth-and-beauty is not a commodity.

Women know their value. They know they can trade their value for their benefit. In SEA this is not a dirty little secret. It’s not even an open secret. It’s just a fact of life. Money is part of the equation, blatantly and openly.

At this point I consider it bullshit manospherian posturing to create an artificial division between cads and providers. Money-and-power-and-social-status is exactly equal to breasts. It can be a cause of sexual attraction in and of itself, and can maintain a relationship when there is nothing else being offered.

Women aren’t men with vaginas. Their sexual attraction triggers are different. It’s not just that they fuck for food. Not JUST a matter of pragmatic sales of a service. Actual attraction is ALSO involved.

Manospherians hampsterbate about this with a zillion “ya buts”. Ya, but you don’t NEED money. Yup, and girls don’t NEED tits.

Having tits is better and more attractive anyway, and girls with tits can get more and better quality men.

Having money is better in exactly the same way. You don’t see many flat chested Penthouse centerfolds, nor are there many broke romance novel heros.

It’s not the case that SOME girls are gold diggers.

It’s just a matter of all the gold diggers mining for gold in different ways.

A lot of guys base their ego and self esteem on the way that they skin a cat.

Wishing it were otherwise is the same as a flat chested girl wanting to be loved for her true self.

Of course money can also get in the way of intimacy, but that’s due to mis-use. Tits can be mis-used too.

aoisdjf said: I think its a more western specific warning about how it’s more about status, fame, dominance, strength, violent and aggressive personalities than just the abstract concept of money. Too many stories of chubby mangina doctors marrying 5s and so on, because all they did is study and have a shit social life (no fame) and no game. Back in our tribal band days where nobody was really materially wealthier than the other women filtered out men based on those more social indicators. It’s the warning to avoid beta bux & alpha fux. An alpha fux & bux is every girls dream guy.

I think the tits analogy works well with what you describe. A girl with tits who neglects her personality won’t get the best men.

Manospherians tend to claim that money is less important than a fine outstanding rack on a svelte figure. Or worse yet, like an ugly girl want the opposite sex to be less “shallow”.

Reality is reality regardless of how we feel about it however. Money is tits.

And monkeys trade bananas for sex, so currency is hard wired into humans. It’s not true that we ever had a pre-money phase of evolution. Men have always been valued based on resources of some sort. Money literally grows on trees, and always has throughout our evolution. There was never a period of time when resources were available equally to all men. That’s not even true for animals, who fight for territory and hierarchy in sharing hunting spoils. Women are experts at judging resources, and money is not a proxy for any old timey pre-money thing that can be replaced by confidence. Money is resources, and resources are resources are resources. Resources are valuable and always have been and have rarely if ever been equally available. Humans fight each other for access to them, and know how to hoard them, and have for plenty long enough to affect female evolution. Primates can recognize a banana when they see it, and they literally offer up pussy for bananas. Confidence might imply the ability to get bananas, but a banana is a banana is a banana.

It is what it is. You don’t have to make the sign of the cross and immediately turn your head when you see it. There is no ya-but about it. It’s right there in front of our faces. It is tits. Many men screen for tits. Many women screen for money. Most men prefer tits to no tits, all other things being equal. Most women prefer more money, all else being equal. Men and women with options are more likely to screen. Tits and money are a common pairing.

Guys and girls with no personality have nothing to do with the attractiveness and power of tits. Tits are still tits, and are one important variable that goes into our unconscious calculation of the persons overall level of attractiveness. Everybody loves tits and wants tits.

14 thoughts on “ALL women are inherently gold diggers down to their pussy juice.”